An extremely common piece of self-help advice these days.

I would place it in a basket with “no pain, no gain” and “be comfortable being uncomfortable”: generally useful, said too often, has some exceptions.

It’s usually aimed at people who are scared of jumping into a new career, committing to a sporting challenge or telling someone they really like them.

Such fear is very real for some individuals. It is often crippling.

Still, the stakes- real or imagined – are relatively modest.

Let’s take the case of telling your partner how you feel.

They might reject you. This can cause some serious emotional harm. It might damage your relationship. If you live with the person, you might have to move out. This could cause material difficulty. All of these things are challenging, but they are not – literally – the end of the world.

In cases like these, ‘push through the fear’ is probably decent advice.

But what about other cases of fear?

What about cases where you think the outcome of a certain action is – literally – the end of the world? Death, the end of our own world, at least.

Well, in some of those cases, you should listen to that fear.

If you’re stood on the white cliffs of Dover and the ground beneath your feet starts to subside, you should listen to your fear and get out of there ASAP.

The same would apply if someone is walking towards you with a knife. Again, your fear says “Get out of there!” and the man who wants to live does just that.

What’s less obvious, however, is how to respond when the threat is internal.

This is an area of great ambiguity.

Each year, thousands of people make a trip to A and E with what they think is a heart attack or some other catastrophic event. This often turns out to be an anxiety attack.

How does one respond in these situations?

If you take it seriously, you may end up with a wasted trip to hospital. You may feel embarrassed that you’ve wasted valuable NHS resources.

If you don’t take it seriously, you may die.

The answer to this depends on a variety of factors: your age, existing state of health/ health conditions, the specific symptoms experienced.

I don’t want to dish out much advice on this particular area. I’m not qualified. One thing I would say is for many people, it’s probably worth erring on the side of caution and getting yourself checked out, at least in the early days. Your health is important.

What I’d like to focus on – in this and future articles –  is those individuals who have been given ample medical reassurance but still have feelings of extreme fear and alarm. For these individuals, there is a mental struggle to be undertaken which is often longer and harder than the recovery from any physical injury.

I’m going to use myself as a case study.

Fear and me: a short history

For almost all of my adult life, I felt more-or-less invincible. Since the age of 16, I’d trained extremely hard, every day. Sometimes I trained 2 or 3 times a day. I wasn’t a naturally talented athlete so had to make up for it somehow.

I have fond memories of going into college, doing my first lesson, then heading to the gym to pull intervals on the rower until I puked up my breakfast. This intensity worked, for a while. Having been terribly mediocre all my rugby career, I got selected to play for Great Britain U18s in 2008. Between the ages of 18 and 22, my resting heart rate was around 45 beats per minute.

As a rugby player, my success was built on invulnerability. I would run directly into people as hard as I possibly could. If at any point I sensed myself letting fear influence my decisions, I would make a point of facing that fear as soon as possible. If I shied away from a particular opposition player, I felt compelled to get the ball immediately and run directly at him. Several times my head collided with a knee, head or elbow and split open. I would be reluctantly pulled from the pitch due to blood regulations, only to tape the wound up and return within minutes. I never got stitched – partially out of a reluctance to let someone with a needle near my eye  but mostly because this would take too long. I bear the scars of this recklessness today. I think they look quite cool.

Important disclaimer:  this sort of behaviour is not exceptional in rugby or other collision sports. There are countless players who perform similar and  more extreme acts of toughness every week.

My desire for invulnerability extended into other spheres of my life, too. I had extreme recreational habits. I worked extremely hard – constantly perfecting – desperately guarding against intellectual attack. I also unconsciously blocked myself and others from accessing large portions of my emotional spectrum.

I was all about control and ‘strength’.

You get the picture.

The beginnings of terror

I experienced claustrophobia once, in an MRI scanner. This took me wholly by surprise, since previously I had been able to control my mental state entirely. Perhaps this was the beginning of the end for the hegemony I held over my own psyche.

That incident aside, I don’t think I ever felt scared or out of control in my whole adult life.

I could push my mind/body to do literally anything I wanted. I simply had not considered my own vulnerability. When my extreme ways pushed me close to death twice, I just brushed it off, carried on, and went right back to the same habits.

It was great, I could see no downsides.

In boxing, they say the punch that hurts you is the one you don’t see coming.

It certainly was for me.

One night in Harrow

I don’t want to talk about the specific details of the particular incident right now, and I’m not sure I need to.

All you need to know is that I felt extreme fear for the first time. I thought I was going to die.

This one incident set off a cascade of reactions that destroyed large chunks of my self-concept and ultimately led to great changes in me as a person, both good and bad.

Fast-forward 2 years and I’m playing a rugby match. 10 minutes in, I throw myself forward with the intent to damage a member of the opposition, only to collide head-on-head with my own player.

2 days later, I go to the gym with my brother. Towards the end of the workout, I start to feel a little dizzy and faint, so go outside. From here, my condition worsens, and I’m led on the floor under a foil blanket. I begin to feel pins and needles in my hands, which travel upwards into my face.

Again – I think I am going to die.

I perked up a bit in the ambulance and in hospital was diagnosed with ‘post-concussion syndrome’, told to rest and sent on my way. For the next month or so, just sitting upright made me feel weird. Standing up was even worse. I tip-toed my way back into physical activity, eventually reaching a point where I could do light gym workouts.

When progress stalled, I sought the help of a neurologist, who diagnosed me with a  condition called BPPV. Fine.

I did all the rehab, got back to the point where I could play rugby to some degree.

Great – I had regained a huge amount of function, but I still wasn’t the same.

Throughout this whole period, a sense of often inexplicable fear had lingered in my brain.

Each day I made deliberate efforts to fight against it, but still it would linger on.

The fear I had was that if I exercised to a sufficient intensity, something would ‘go wrong’ in my brain again, and I would be incapacitated or die. This fear was obviously related to the earlier traumas I had experienced, in the gym and before.

There are many people out there in similar positions.

When a traumatic event is not processed properly, traces of it linger on in our conscious and unconscious mind, causing all sorts of issues.

OCD, chronic anxiety (also known as generalised anxiety disorder) and a range of other anxieties can result.

In my case, there seemed to be a mixture of OCD, chronic anxiety and health anxiety going on.

The Point – or lack of

I’m kind of unsatisfied leaving this article here. It feels like I’ve built up towards the point but failed to deliver it. That said, if you’ve read this article you’ll know I have made a commitment to putting stuff out there, however imperfect, and I am serious about keeping to that. In subsequent articles, I will delve deeper into mental health conditions and the methods I have used/am using to recover from them.

(A small portion of) Takeaway: 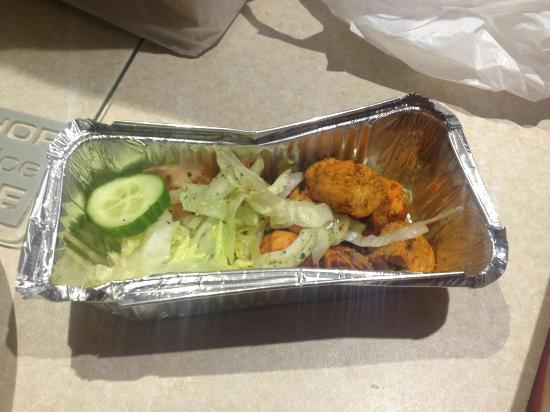 For now, I’d just like to make the following points:

View all posts by JoshHalstead

2 thoughts on “Fear, Vulnerability and I”